An Orange County accident that resulted in the death of Los Angeles Angels of Anaheim pitcher, Nick Adenhart, and two others, has been concluded, according to cnn.com. The driver of the vehicle, Andrew Thomas Gallo, 23, was found guilty of three felony counts of murder, felony drunk driving, and two other felonies in September 2010. On December 22, 2010, Gallo was sentenced to the maximum penalty of 51 years to life in prison.

Gallo’s blood alcohol content (BAC) was .19 on April 9, 2009, as he was driving 65 mph in a 35 mph zone. He drove through a red light, hitting the car containing the victims just hours after Adenhart pitched. 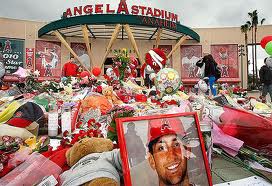 Gallo was on probation with a suspended license for a previous DUI in San Bernadino at the time of the crash.

California Vehicle Code Section 14601.2 states: “A person shall not drive a motor vehicle at any time when that person’s driving privilege is suspended or revoked for a conviction of a violation of Section 23152 or 23153 [DUI] if the person so driving has knowledge of the suspension or revocation.”