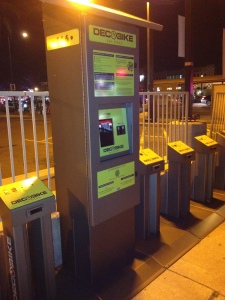 San Diego neighborhoods, including Hillcrest, North Park, South Park, Golden Hills, Mission Hills, Little Italy, and Downtown, have new DecoBike stations.  In fact, at least 80 rental stations have been installed, with a total of 180 planned.  Future expansion is supposed to include our beach communities.

As a DUI defense attorney, I see a possible issue with these bike rentals.  Although Mothers Against Drunk Driving, aka MADD, propaganda has brainwashed us all since grade school to believe if you drink an alcoholic beverage and drive a vehicle, you should be prosecuted for drunk driving, many people do not know it is also a crime in California to bike or cycle while under the influence, (BUI or CUI respectively).

If the bicycle is self-propelled, you cannot be charged under the standard driving under the influence statues.  However, you can be cited under California Vehicle Code Section 21200.5, which states, “…it is unlawful for any person to ride a bicycle upon a highway while under the influence of an alcoholic beverage or any drug or under the combined influence of an alcoholic beverage and any drug.  Any person arrested for a violation of this section may request to have a chemical test made of the person’s blood, breath, or urine for the purpose of determining the alcoholic or drug content of that person’s blood…”

The two biggest differences between a DUI and a BUI is:  1.) DUI has a “Per Se” limit of .08 blood alcohol content and a BUI does not have a specific limit; and, 2.) The penalty for a conviction for BUI is a fine of not more than $250.00, which is a substantially lesser penalty than in a standard DUI case.

So if you are out and about in San Diego’s fun party scene and you are considering using the new DecoBikes or riding your own bike, keep in mind that you can be cited for BUI if you are under the influence.  So if you cannot ride safely, choose another option for getting around town.

But, if you are charged with biking under the influence, you deserve to hire the Law Offices of Susan L. Hartman to aggressively defend your case.  Contact us today at 619-260-1122 for your free, confidential phone consultation, or use the “Contact Us” form on this page.